A Night with Little House

We had a fun, impromptu evening out on Thursday at the Des Moines Playhouse for the opening of "Little House at Plum Creek." The girls really had a great time. And hubs and I enjoyed as well. 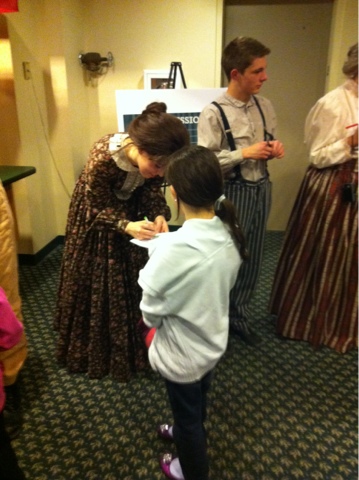 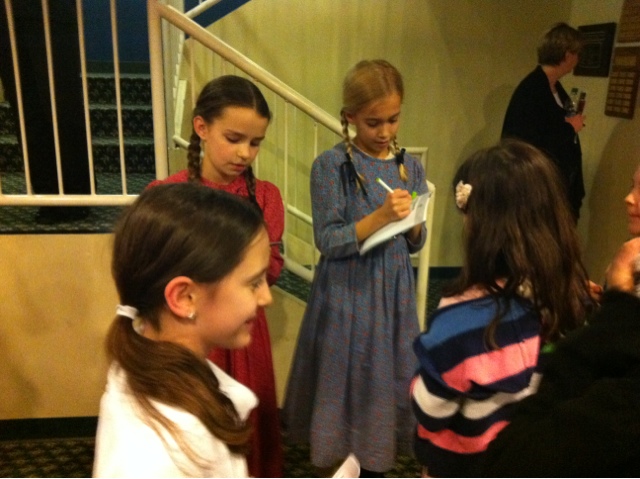 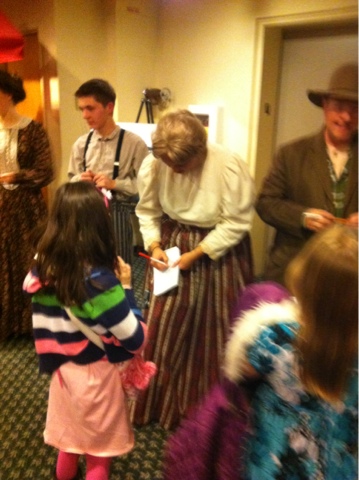 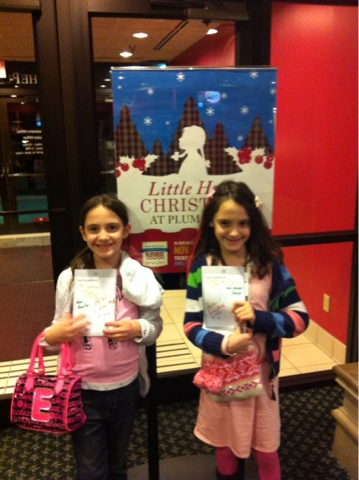 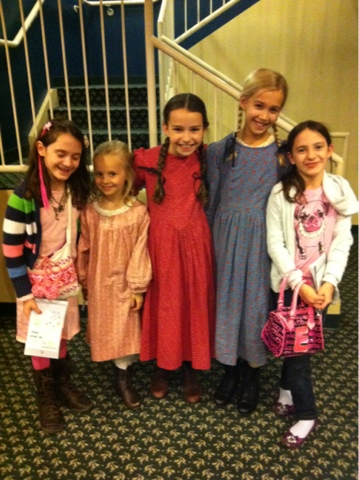 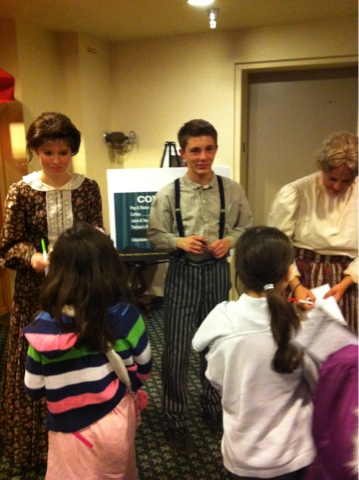 Absolutely amazing, how fast October passed. Now that it's November 1, I find it actually hard to believe October has come and gone already.

My month really accelerated October 9. I was asked the weekend of October 7-8 if I would be interested in taking over as instructor of two classes, the instructor of which needed to step aside due to health issues. I have taught the same classes myself, so I agreed, and attended class with the instructor on October 9. Beginning October 11, I was teaching 3 classes instead of 1, not to mention that the new classes are both writing classes, so that means a lot more grading. This big change in my class load alone made the month go quickly for me. 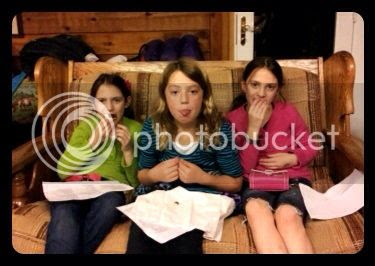 Immediately following camp, we had a great visit with Aunt Tori, who was in town for the Des Moines  Marathon. 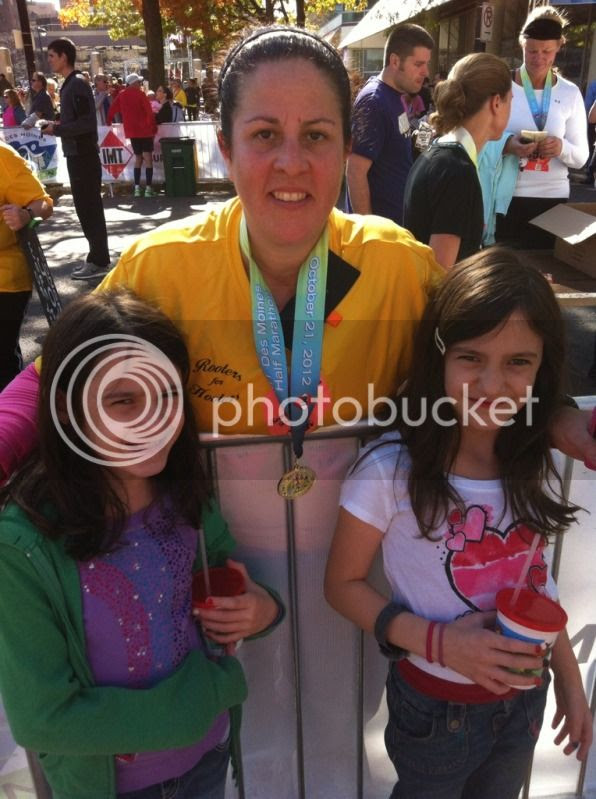 There was a school skating party last week, and fourth grade concert performance was a fun part of October as well. The fourth graders served as the chorus for The Emperor's New Clothes (fifth graders had all the big parts). 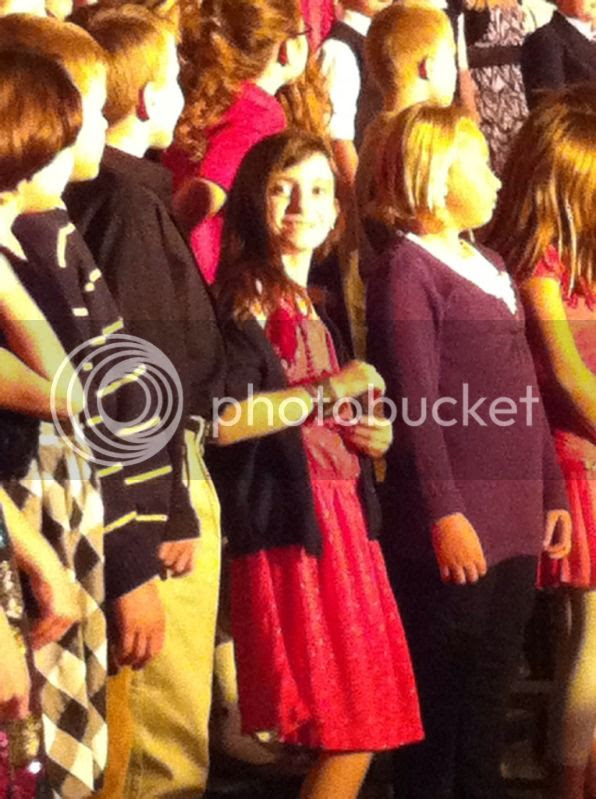 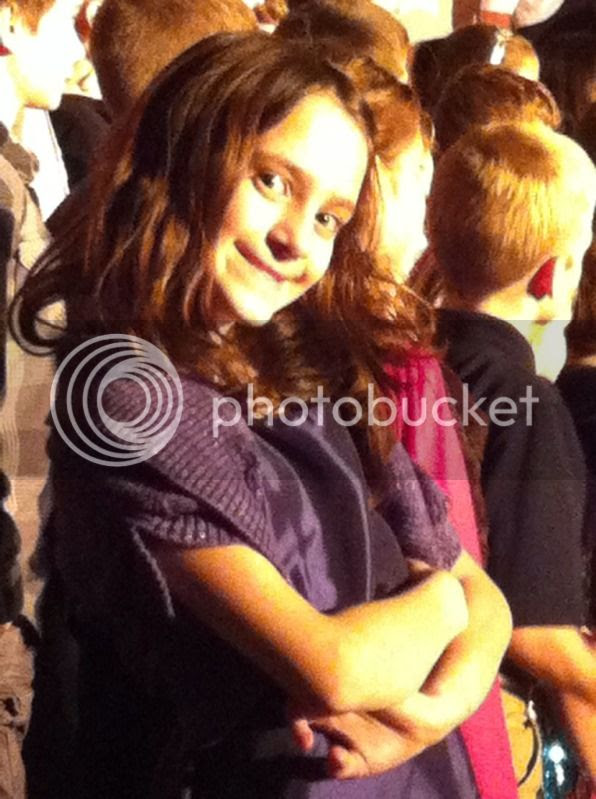 Of course, the big October event was trick or treat! We have Beggar's Night here in Des Moines, so trick or treat is held October 30. My two candy corn girls were a big hit with the neighbors. Posted by Unknown at 7:32 PM No comments:

Busy week, as I am jumping in mid-semester as the new instructor on two writing classes. Nothing too exciting to report. I did take my class to hear a speech on campus by a top economic advisor from the Obsma administration, Kruegger...first name escaping me at the moment. Here's a photo. 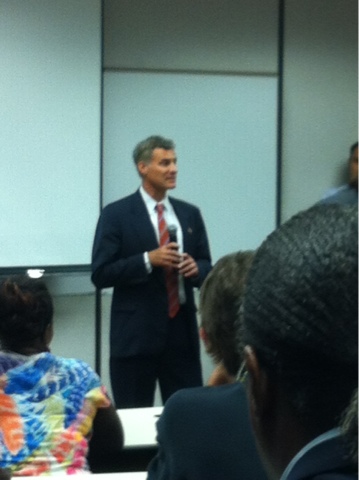 And here's a message from my Maddie that she just thought was too cute. Smile, everyone! :) 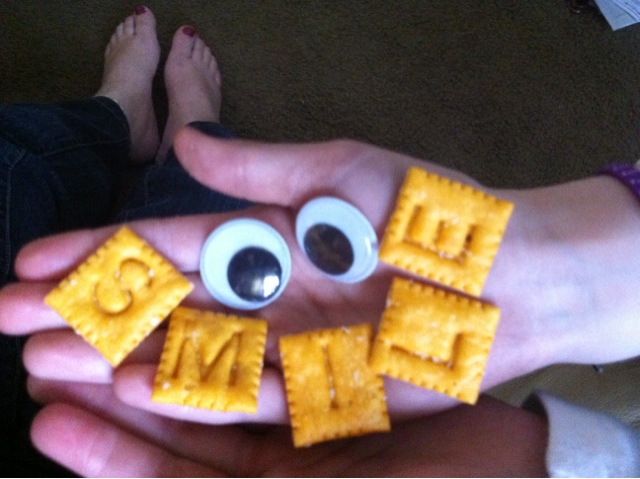 Made spaghetti sauce and a quick cavatelli for an easy dinner. Yum. 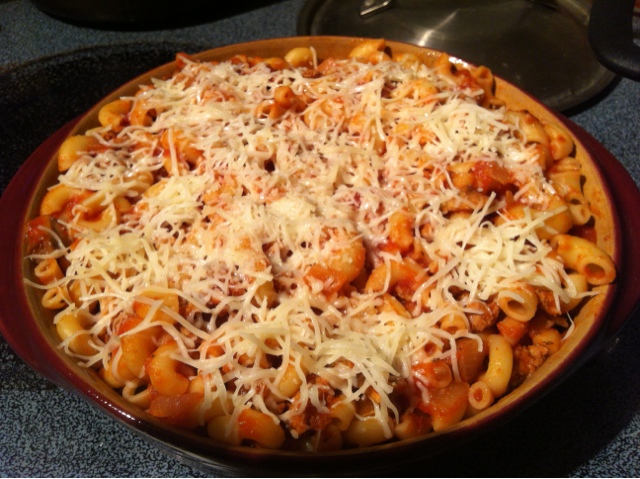 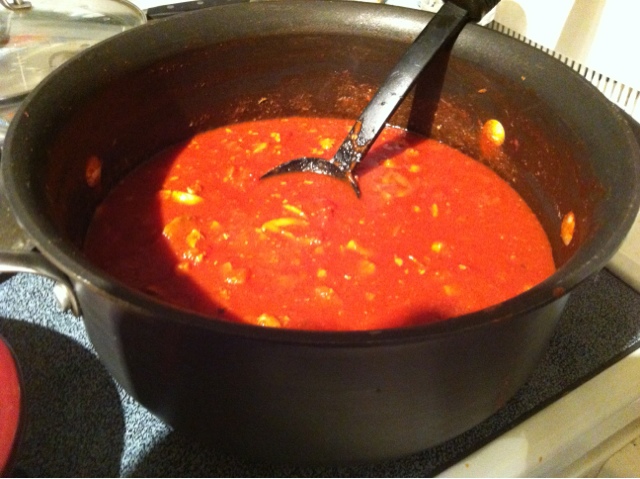 Posted by Unknown at 6:36 PM No comments:

Found a cute idea on Pinterest that inspired this. We have a built-in curio in the living room, and it was high-time I dust it off and give it a re-do, holiday style! What do you think? This was pretty easy as I had a lot of cute, small decor ready to go. Made up that mummy card earlier this week, and it filled a final space on the shelf just right. :)

Posted by Unknown at 2:26 PM No comments:

Amazingly, my Blogger blog is still here. When I searched for it today, I was surprised to see that I didn't even have to log in. The system remembered me, though I haven't posted since March 2010. And I'm using my new MacBook, so I can't imagine how it knew the password. I guess Blogger knew I would be back.

I was inspired to find my blog today by a new friend's blog. She posts all about decorating and cooking and family life, and I started to think that maybe I should blog again. Facebook has all but taken away blog inspiration, given that it's way too easy to update the fun and interesting moments along with photos, as I said two years ago.

But still, here's my little blog, looking so happy to see me. Maybe that means something.

Here's what I did yesterday. I'm having a spurt of Halloween-decorating energy, and can't wait to hang this over the curio in the living room once I get it cleaned up. 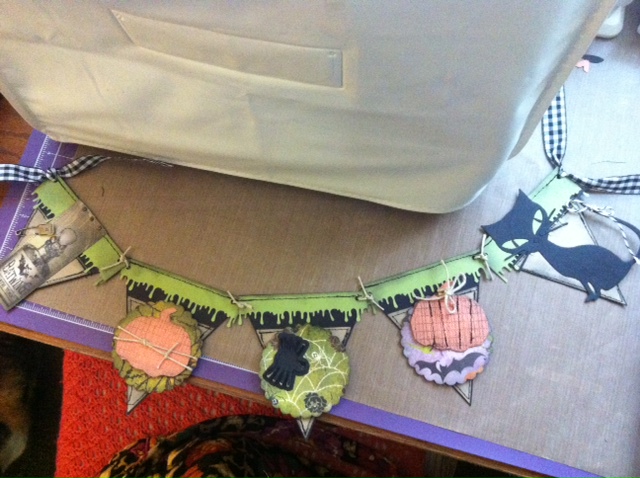 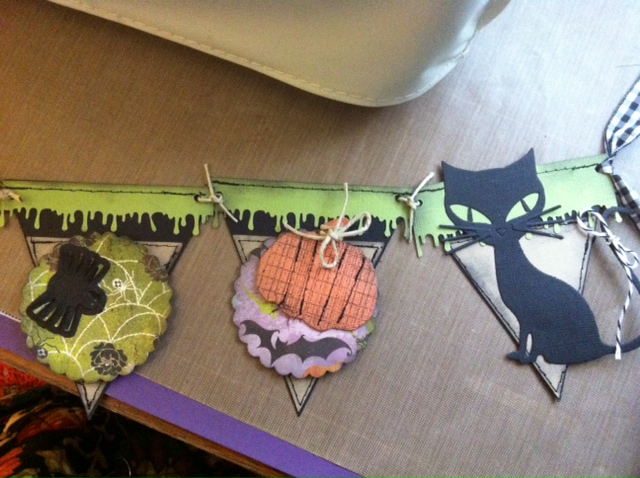 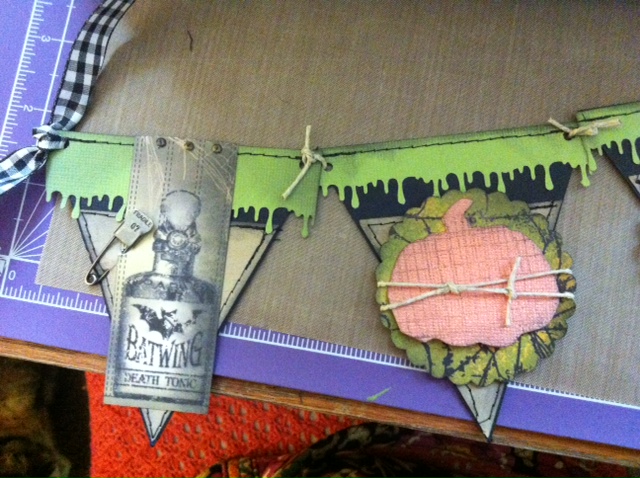 So that's where I am today. If I get all my decorating done, I'll post some photos. And, hopefully, I'll be back to my blog sooner rather than later. :)
Posted by Unknown at 11:00 AM No comments:

To blog or not to blog

I had decided to abandon the blog since Facebook is just too darned easy to update and post photos on. For gosh sakes, I send the photos to FB directly from my phone. I don't even have to make the effort to upload to my computer first. It's too easy.

Lately, however, I've thought about posting some photos of better quality, just for fun. I just don't know if I'd keep it up...uploading photos from the camera card always gets me in the end. And i know it's photos that make good blog posts. I read blogs and expect photos. What would Cake Wrecks be without photos, after all?

This totally explains my move to Blogger from Typepad not long ago...I'm a bad blogger these days. I blame Facebook. Facebook makes it wayyyy too easy to share what I want to share, and on the go, at that. I can take a photo with my cell phone and send it directly to Facebook. Why would I want to get out my camera, take photos, upload them to the computer, edit with PSE, then upload to Blogger to share something quick that I'm working on or that I just saw and wanted to share when Facebook is so much easier? Yeah, I know......

I do still like blogs. I do still like Blogging. I'm trying to make a go of the Examiner.com article-writing, but that's hard, too, especially since school started and we're on the go so much. I need to get back on that effort as much as possible. And scrapbooking?

No, not so much doing the scrapbooking. I made cards to send the girls' back-to-school snapshot and a dance class snapshot out to family and friends. I've made no pages at all though! Not since a July crop. Maybe soon....And knitting?

No, not so much doing the knitting. Took the entire summer off, actually. Lately, however, I've done a bit of knitting on the sweater for Maddie that I started back in the winter, and also on a simple but fun sock I started a while back. I only did the ribbed edge, and have now quickly brought the first sock down, around the heel and am now working the foot. I hope to get it done quickly and start the second sock. That will serve as inspiration for me to get it done so I have a new pair to wear. I am jealous of those who knit all the time and knit more complicated, beautiful socks (like Amanda posted on Facebook recently!). I also want to knit the girls' some leg-warmers to use in dance class. I bought a pattern over two years ago, and now I have a good reason to knit them.

All else is moving along....Girl Scouts started again last week. Tonight is the year's second PTO meeting at school. Girls started faith-formation class a few weeks ago. Upward soccer continues through October 24. (I'll be glad when that's over, to tell the truth.) So we're on the go...a LOT. Once soccer ends, it'll just be weekly dance and faith formation classes. Girl Scouts are every other week (or less perhaps); PTO is only monthly for me. Husband works a lot, too.

Otherwise, Girl Scouts begin their Fall Product fund-raiser this Friday, so if anyone would like some nice nuts, chocolate-covered nuts and pretzels, and other chocolates in fun little cans and tins, let us know starting Friday afternoon!
Posted by Unknown at 10:43 AM No comments: